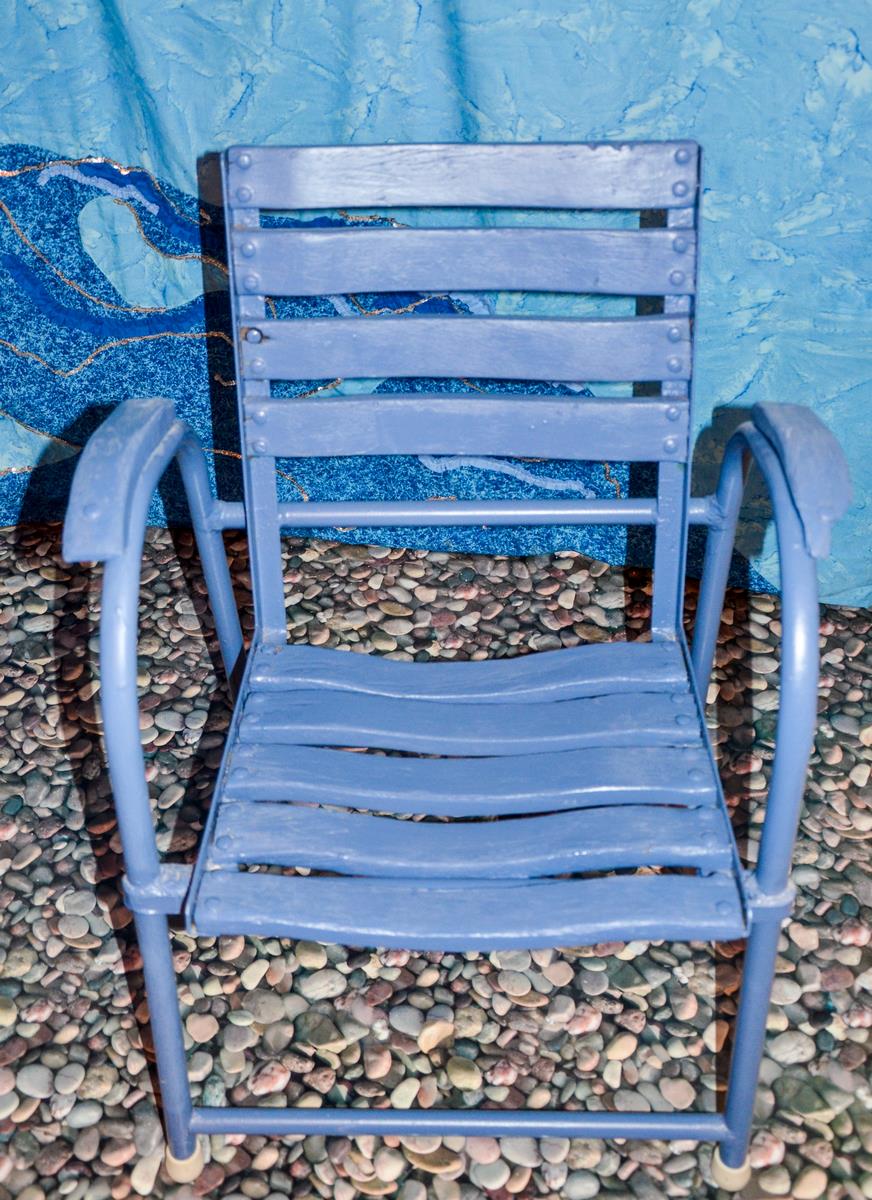 The "Promenade des Anglais" has entered into the legend of the history of Nice, and with it, have entered into the same legend, the "blue chairs", "the chairs of the promenade" as we say here. The walkers of yesterday and today like to come here to rest for a moment and admire the "beautiful blue" of the Riviera. Elbow to elbow, they look at the sea and contemplate the waves day and night. For the people of Nice, they are the emblem of the Promenade des Anglais.

The origins of the Blue Chairs

The "blue chairs" have entered into legend, but who remembers, or knows its manufacturer Charles Tordo?

The story begins, after the war, around 1950, when Mr. Ballanger, holder of the concession, set himself the goal of manufacturing 800 sturdy chairs. At that time, it was necessary to pay to sit down, and "the chair", in return for a modest sum, gave a small ticket worth "receipt" and "right to sit down".

In order to be able to manufacture these chairs, one evening of September, Mr. Jacques Ballanger came to find Charles Tordo, a tourrettan, known for his ingenious spirit, his skill, his multiple patented creations and his know-how. He was then, employed in a train maintenance company, at Michel's. After his working day, it is in his workshop, the old stable of the mule; with his family, that he will devote his evenings and Sundays to the manufacture of these chairs, which the family had nicknamed "the Ballanger chair".

It is there, that one will always find there a machine in the course of realization, an invention to be perfected, a creation in progress...

But, let us listen rather to his son Louis Tordo and the son of Jacques Ballanger tell us... 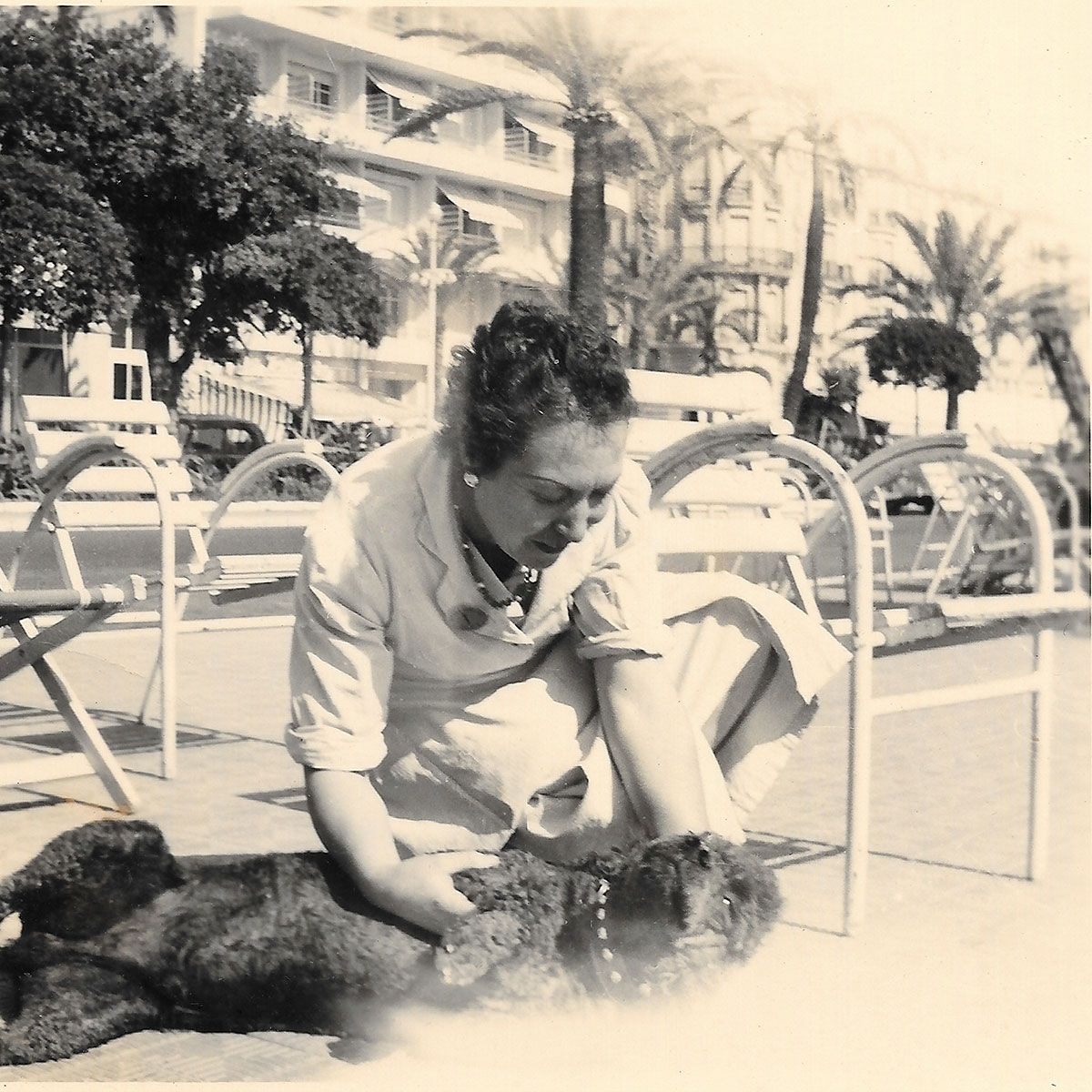 From Menton to Arcachon, blue and white chairs

Mr. Ballanger's concession was large. It went from Menton to Arcachon, stretching from the French Riviera to half of the Atlantic coast. He managed seasonal or event-driven street furniture for different cities.

It is in a concern to create sturdy armchairs that he had appealed to Charles Tordo. His armchairs until now were made of wicker and Mr Ballanger (the one who had the idea) was going to create with Charles Tordo (the one who knows how to make) the most robust and practical model of armchair that it is. Sometimes blue, sometimes white according to the cities or according to the customs of the town halls. In Nice the "Blue Chairs" were blue for the seaside, white for the gardens.

The armchair was redesigned many times over the years. For example, the 1950 model was reinforced with lower crossbars, TRCC bolts (round head glued square) in A2 stainless steel, cataphoresis paint with polyester lacquer, etc. 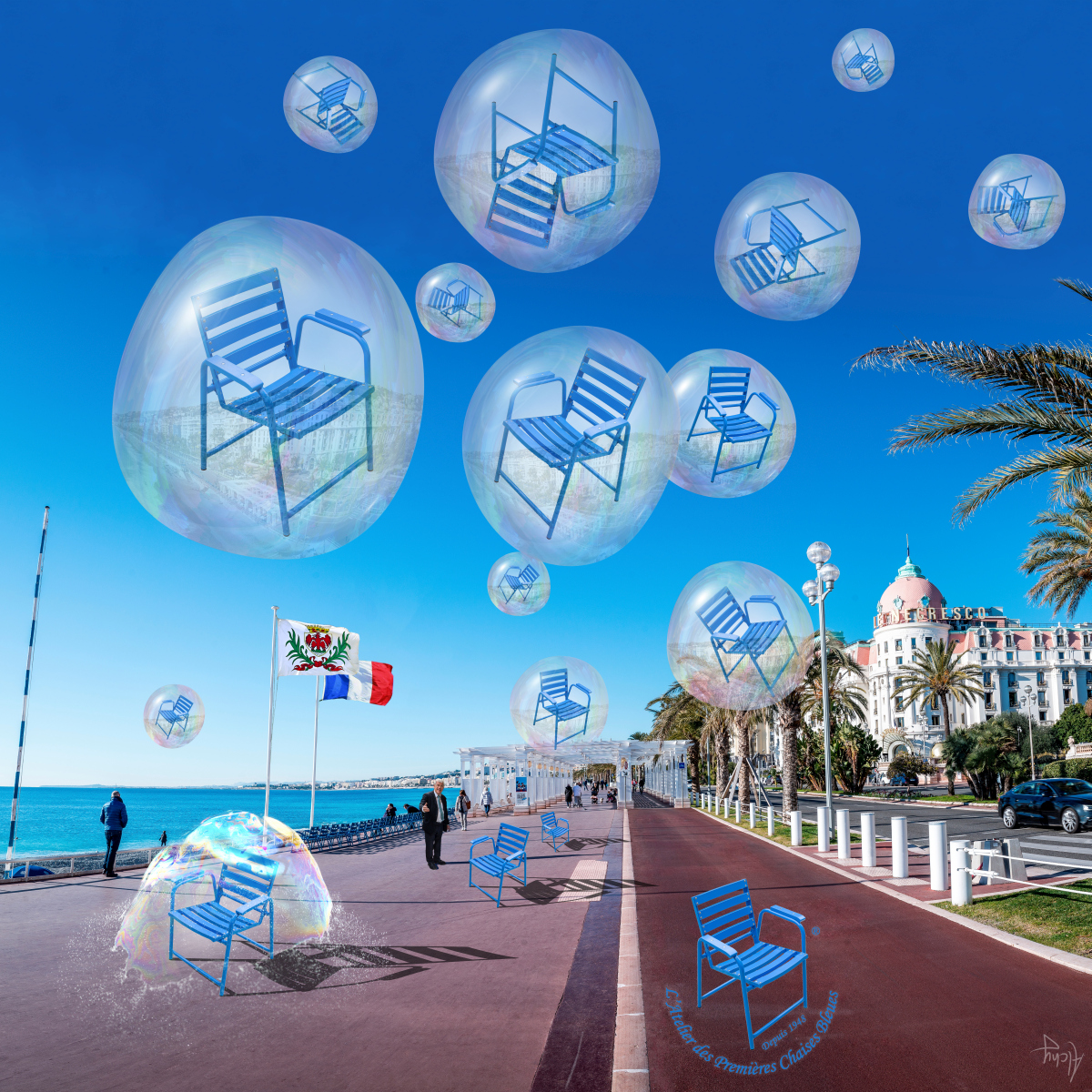 Is the Blue Chair a chair, an armchair or even a work of art?

Bubbles - The arrival of the Blue Chairs by Alchy

The Blue Chair of the Promenade des Anglais is an armchair. This chair has many armrests and was designed to be an armchair. However, it is a perfectly pure model of chair that gives it the appearance of a chair since it only remains the practical structure with the industrial and ergonomic advantages sought after.

Louis Tordo, the son of the manufacturer Charles Tordo, noticed in a second time that this chair had a particularity, that of being inscribed with the golden section. His father's intuitive jet showed this admiring elegance. The self-taught precision was almost perfect. He then rectified very slightly the plans of the chair so that the golden section would be perfectly inscribed.

The "Chair" which had become an unmistakable symbol of Nice had inspired a very large number of artists for aesthetic, cultural, emotional and generational reasons. But none had yet seen its inscription of the golden section which was not discovered nor revealed before the 21st century.

The Blue Chair thus seems to appear as an industrial work of art. Surpassing the attachments and memories by the incredible elegance of its simplicity and robustness and finally by the fun and delight of discovering its governance to the number "of harmony".

Where are the Blue Chairs?

Since 2010, the chair is again manufactured for the general public by Charles Tordo's children and grandchildren who have finished perfecting its dimensions and materials. Many other models of Blue High, Double or Bench Chairs have also been created for the expectations of the public and the signs that have adopted this furniture.

The production of Chaises Bleues was first abandoned in 1970. The Chaisières system no longer satisfied the morals of the time. Most of the chairs were bought back by the town halls from Jacques Ballanger. They then put them free of charge at the disposal of the public and maintained them until the 90s and even 2000 for the last models which remained.

Lugged on the beach by holidaymakers, the instrument of skaters, children and soccer players, exposed to the sea air and the sun, for 20 to 30 years the last Blue Chairs have in fact really feared only one thing: theft. This is the biggest cause of their disappearance. But it is paradoxically a consecration for their creators, a mark of esteem finally very motivating.

Others were recovered by artists, sometimes in large numbers as Armand did with his wall of Blue Chairs integrated into the Museum of Modern Art and Contemporary Art of Nice.

The artist Ben (Benoit Vautier) keeps nostalgically at home the relic of a blue chair from the 50s on which his childhood friend Jean-Marie Le Clézio liked to sit (source: Le Point).

In 1970 the production of the chairs was thus abandoned and nobody manufactured them any more. But in the Nineties, a demand of the public and local politicians was heard. The last units of Chaises Bleues are still there but for how long?

At the end of the Nineties, the designer Jean-Michel Wilmotte deposits his model of Blue Chair which is in particular adopted by the cities of Nice and Cannes. The patent is deposited in 1998, the production is then made in Haute-Loire, the chair is struck with the logo of the cities (Nice, Cannes...) and makes its great return on the Promenade and the Croisette.

Obviously, it did not take long before the first models were stolen. From 2000 chairs ordered since, the inventory of the city of Nice counts only 300 in 2011. The chairs were then going to be fixed between them and on the ground ...

The model of Wilmotte joins the model of the Blue Chairs of Charles Tordo of 1955 based on the old model of the wicker chairs of 1945 which are both inspired by it. The armrests are rounded and the seat is more recessed than the Tordo model of 1950.

By the Tordo Family (reedition of the original chairs and new models):

The chairs of the Tordo family will come back only a little later in 2011 with the will of the grandchildren and Charles' son, Louis Tordo. Gisèle Guillaume, born Tordo, will become the ambassador of her grandfather's chairs. These chairs are once again manufactured by the family companies LCB and TORBEL INDUSTRIE for local authorities and are now just as much aimed at the general public with a very wide range to satisfy a variety of uses.

They adopted the Blue Chairs

Where to buy the Chaises Bleues?

For e-commerce, it is here. You can discover the original models and the whole range of the new Tordo chairs to satisfy all desires and all uses. Browse our online store and order with ease!

For local business, visit our store in Tourrette-Levens and also visit an exceptional maritime landscape located at the foot of the mountains less than 30 minutes from Nice. More than a furniture and decoration boutique, L'Atelier des Premières Chaises Bleues is also a tea room, a small Chaises Bleues museum, a delicatessen of local products and a fast food restaurant of these same selected products. You will discover all our chairs and furniture as well as the range of household items that we have developed on the theme of the Chaise Bleue.

Do you need a vacation and the French Riviera?

That's good timing! We offer 5 charming Gites in the heart of Tourrette-Levens. Very well equipped, with a spectacular view of our mountains and sumptuously furnished, they are also quite economical as a vacation package for family or friends, accommodating up to 4 people.